Another pick from the Dream Street Rose album.

Rock of Ages tell me where does it stand

Are we bound for the promise land

Bless my soul, I ain’t ready to die

And my future is in your hands.


From the album by the same name.

You been in all my dreams since you been gone

Each morning when I wake up with the dawn

Dream Street Rose I like the way you smile

Posted by Lucy Naylor Kubash at 8:47 PM No comments:


Another favorite song and one that, if you listen to the lyrics, is really brilliant. I just simply love it.

Comes a horseman wild and free

Tilting at the windmills passing

Who can the brave young horseman be

Posted by Lucy Naylor Kubash at 8:03 PM No comments:

Gordon Lightfoot said this song was inspired by his hometown in Ontario. It reminds me of the place where I grew up and maybe is why it’s another of my very favorites. It fits with this time of year.

Rainpools in the woodlands, water to my knees


Another song from the Summertime Dream album but with a very different message.

Where are the boys in their coats of blue

Who flew when their eyes were blind

Was god in town for the Roman games

Was he there when the deals were signed


This song is often played at Christmas, although it really has nothing to do with the holiday. I suppose it’s the soft sound of jingle bells in the background that makes it fit the season, although the story is that it was written in the middle of summer. It’s a lovely quiet and romantic song, and certainly perfect for any night like this one when winter does not want to loosen its hold.

The lamp is burning low upon my tabletop

The snow is softly falling

The air is still in the silence of my room

I hear your voice softly calling.

I would be happy just to hold the hands I love

On this winter night with you.


This song is from the Don Quixote album and is one I don’t think I’ve ever heard Gordon sing in concert (but I’ve only been to 5). It’s another favorite of mine and reflects, I’m sure, some of his own experiences earlier in his life.

I’m on my second cup of coffee

And I still can’t face the day

I’m thinking of a lady who got

Lost along the way

And if I don’t stop this trembling hand

From reaching from the phone

I’ll be reaching for the bottle, Lord

Before this day is done.

Posted by Lucy Naylor Kubash at 8:17 PM No comments:


Another feel-good song. I like it because it’s about a small town and flowers and birds singing and-- what else-- summertime.

Where the road runs down by the butternut grove

Do tell at the noonday bell

It’s time for a summertime dream.

Posted by Lucy Naylor Kubash at 6:30 PM No comments:


This is probably one of Gordon Lightfoot’s best known songs. While Canadian fans had known and appreciated his music for a long time, this was the first song to break into the top ten. If you were around in the early 1970s, it’s the song that probably introduced you to Gordon Lightfoot. It’s a song about love that changes and feelings that have gone. A little sad, a little wistful, and even this many years later, if you’re a fan, you never tire of hearing it.

If I could read your mind, love

What a tale your thoughts could tell

The kind the drugstore sells

When you read the part where the heartache comes

The hero would be me

If You Could Read My Mind, Gordon Lightfoot


This song has always been one of my favorites. Written to help celebrate Canada’s centennial celebration, it’s an ambitious song that’s played in three parts and tells of the building of the railroad across that country. A saga in itself, it says much about the men who worked and lived and died to make that dream come true.

Oh there was a time in this fair land

When the railroad did not run

When the wild majestic mountains

Stood alone against the sun

Long before the white man and

Long before the wheel

When the green dark forest was too silent


Another song about sailing, but this one is light and mellow, makes you think of warm winds and gentle waves. It’s what I call a feel-good song.

I’m sailin’ down the summer wind

I’ve got whiskers on my chin

As I while away the time of day

In the lee of Christian Island.

Another favorite theme in many of Gordon Lightfoot’s songs: ships and sailors. Ships on the high seas, ships of the Great Lakes, and the weathered sailors who man them. Some of the songs are lighthearted and lilting, others tragic. None is more haunting than this song that tells of the many ships that were lost when they sailed around the treacherous Cape Horn of South America.

All around Old Cape Horn

Some who wish they’d never been born

They are the Ghosts of Cape Horn


Posted by Lucy Naylor Kubash at 7:23 PM No comments:


Being down on your luck, going home, wanting to see your family, missing the people you love—they’re common themes in many of Gordon Lightfoot’s songs. This song expresses all of that.

The Chinook wind is a movin’ in

Though I’ve done the best I’ve could,

My old luck ain’t been so good,


Posted by Lucy Naylor Kubash at 7:11 AM No comments:


This song has always been one of my favorites. Maybe because I like ponies. It’s a song about a Peter-Pan-like someone who takes children on magical fantasy adventures while they sleep. The lyrics speak of pirate ships, holds filled with gold, and ponies that “live on candy apples instead of oats and hay.” That we should all have such lovely dreams!

If you listen very closely, be as quiet as you can

In the yard you’ll hear him, it is the pony man. 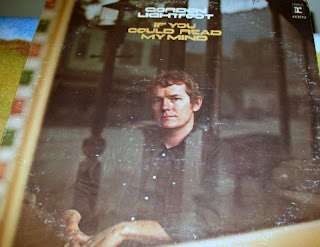 I have been a fan of Gordon Lightfoot and his music for most of my life, probably since I first heard “If You Could Read My Mind.” I first saw him in concert in March 1975, at Western Michigan University. I’d already been listening to his music for several years and was excited. So close! My other half (of now 41 years) was much less enamored of him and didn’t want to go, so a girlfriend and I made the trip. Newly expecting my first child, I was finally feeling less exhausted and was thrilled beyond thrilled to get out and see a concert. On the drive to Kalamazoo, the fickle late winter weather turned even more wintry and snow started swirling. Not to be deterred, we forged on. I wish I could remember more about that concert, other than how excited I was to see the man, whose songs I so loved, live on stage. What songs did he sing? This was pre-“The Wreck of the Edmund Fitzgerald,” because the ship was still 8 months away from sinking. I’m sure it was a lot of those early songs that were in his repertoire, the ones that first lifted the Canadian troubadour out of obscurity and sent him on tour across America.

I saw Gordon Lightfoot in concert several more times over the years, twice within the last three years. I think he likes to play in Michigan. I’ll see him again when he stops in Grand Rapids as part of his “50 Years on the Carefree Highway Tour” on May 6. As a tribute to the man and his music, and to reminisce a bit, I’m going to post a few lines from 50 songs, one song on each of the 50 days leading up to that date. Some well-known, some a little less known but no less loved by his legion of fans. So here’s today’s pick, perhaps one he sang at that concert in March 1975.

“In the early mornin’ rain, with a dollar in my hand

With an achin’ in my heart, and my pockets full of sand

I’m a long way from home, and I miss my loved ones so

In the early mornin’ rain, with no place to go.”