Recently I attended the Romantic Times Book Lover’s Convention held this year in Kansas City. While I’ve been to a number of Romance Writers of America conferences, this was the first time at RT for me. What a great time I had! Rosanne and I arrived early on Wednesday morning and were greeted by 75 degree temperatures and a bustling convention hotel. The convention was held at the Sheraton Hotel Crown Center, but we were in the overflow hotel, the Westin Crown Plaza. It was a lovely hotel and our room overlooked Union Station. We also had a very good view of the quickly changing sky as the weather turned back to winter but more about that later. Workshops started that day, and I was able to attend two in the afternoon after getting settled in our room and getting some lunch. One was on Victorian Women’s Clothing from the Inside Out. Author Deeanne Gist showed us how a lady of Victorian times dressed from her bloomers and chemise to her corset, petticoats, hoops, skirt and jacket. I have to say that after seeing her laced into the corset, it’s no wonder ladies of that era often fainted. The second workshop was about merchandising in the Apple Ibookstore by Mark Coker, founder of Smashwords. He passed on some good information for anyone publishing digitally and how Apple works with authors to promote their work. I have to say I wish I’d been a little more alert for that workshop but after getting up at 3:00 a.m., riding the shuttle to O’Hare Airport for two hours and then flying down to Kansas City, I was a little bushed by 7 p.m.

The second day I went to three workshops that concentrated on self-publishing: Subsidiary Rights, Indie vs. Traditional, and Options in Self-Publishing. I did get some good information, and it was interesting to gain different perspectives on self-publishing. All the panelists had varying experiences and advice to share. That night the RT 30th Anniversary Ball was held and what a delight to see so many authors who are truly “Legends of Romance.” I met Kathryn Falk, founder of Romantic Times and a long-time supporter of the genre. Also authors Janelle Taylor, Shirl Henke, and Bobbi Smith as well as Rosanne, who were among those honored as legends. It was a beautiful setting, with ballroom dancers for our entertainment (Heather Graham was one of them!) before the dinner and introduction of the authors. One of the more hilarious highlights of the evening was having Larry Kirshbaum, vice-president of Amazon publishing, speak and then strip down to the reveal the romance t-shirt he was wearing (designed by our own chapter member, Jackie Braun!). While the evening was a wonderful look back, the future of romance was also celebrated with more than 50 authors from Entangled Publishing taking the stage.

Friday brought more workshops on Jumping Self-Publishing Hurdles, The Inspie Novel—More Than You Think, and From Self-Published to Montlake and Beyond. As always, romance authors are so willing to share their knowledge and experience. My only disappointment was that none of the workshops were taped, so it was very difficult to choose and I ended up missing some that I would love to have heard. But there was a huge selection and really something for everybody. RT is also geared toward romance readers and many workshops were just for them. It was encouraging to see so many readers, especially younger adults and teens, eager to learn more about their favorite authors. Don’t let anyone tell you that the younger generation doesn’t like to read. Anyone who thinks that should have been at RT.

Friday night we went to dinner at a restaurant in Union Station and a good time was had by all. Did you know Shirl Henke likes to drink Pink Squirrels? Eileen Dryer told a few of her famous tales and we invited her to come back to retreat soon. By this time we were glad to get to both hotels through covered skywalks, because winter had come back to KC with temperatures dipping into the 30s and snow making an appearance. Of course we hadn’t brought much in the way of warm clothes because the forecast had been for SUMMER temps. Fortunately, the gift shop sold some nice sweater shawls.

Saturday I was pretty much workshopped out and most of that day’s activities were for readers to meet authors. I did attend the Book Fair, and it was amazing how fans had driven many miles and lined up by 7:30 a.m., bringing their rolling suitcases with them to take home books signed by their favorite authors. Of course I bought my share and then had to figure out how to pack them for the trip home. I found several new authors (new to me anyway) and look forward to reading their books.

For a first time at RT, it was a fabulous time and the workshops well-worth attending. Next year it will be held in New Orleans, which I’m sure will provide a unique setting. It’s a great conference because the focus is so different from RWA, and I’m glad I decided to go.

Playlist for May 6 Concert: "50 Years on the Carefree Highway Tour" 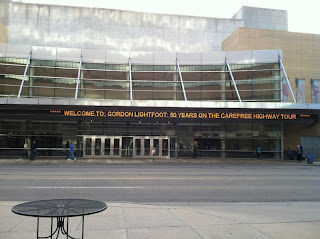 May 6 concert at Devos Performance Center in Grand Rapids, MI.


I’d Rather Press On


The Wreck of the Edmund Fitzgerald


All the Lovely Ladies


Make Way for the Ladies


If You Could Read my Mind


Song for a Winter’s Night


I made it and didn’t miss a day, in spite of just getting back from a four day trip to a writers’ convention in Kansas City, MO. It’s been fun taking a 50 day trip through Gordon Lightfoot land and revisiting many of his songs that are longtime favorites but that I hadn’t listened to in awhile. I’m looking forward to seeing what songs he’ll sing at the concert tomorrow night at Devos Center in Grand Rapids, MI. I hope some of the old favorites I’ve mentioned here. I’m sure one of them will be this cut from the Sundown album, 1973.

Picking up the pieces of my sweet shattered dream

I wonder how the old folks are tonight

She left me not knowing what to do

Carefree Highway, let me slip away on you

Posted by Lucy Naylor Kubash at 7:11 PM No comments:

Almost there!! A song that is just what Gordon Lightfoot is all about. From If You Could Read My Mind album, 1969.

The minstrel of the dawn is here

To make you laugh and bend your ear

Up the steps you'll hear him climb

Listen to the pictures flow

Across the room into your mind they go

Listen to the strings

They jangle and dangle while the old guitar rings

Minstrel of the Dawn, Gordon Lightfoot


A little sadder song but another favorite from the Sundown album, 1974.

Is there anyone home in this house made of stone

Anyone inside know my name

I’ve been around for a half a hundred days

Turn around, don’t look down

There’s a man behind you with a gun

Is There Anyone Home, Gordon Lightfoot

Posted by Lucy Naylor Kubash at 8:39 PM No comments:


A more upbeat song from the 1982 Shadows album.

I’m bent but not broken, all I need is some rest

And a bottle of your very best

Posted by Lucy Naylor Kubash at 6:44 AM No comments:

50 Days, 50 Songs to the "Gordon Lightfoot: 50 Years on the Carefree Highway" Concert

There’s a love I hold dear

And it shines through each year

It’s for better or worse

It’s for people who thirst

For a love that burns brighter right now

And it shines on and on till all sadness is gone

And if children had wings I would sing them their song

Everything will be fine by and by

If Children Had Wings, Gordon Lightfoot

Posted by Lucy Naylor Kubash at 11:03 AM No comments: