My Heroes Have Always Been Cowboys

From as early as I can remember, I bought into the cowboy myth. Being a child of the 50s, it wasn’t hard to do. Roy Rogers and Gene Autry TV movies filled Saturday afternoons, and at night there was Marshall Dillon in Gunsmoke. My dad and I were avid watchers. Westerns were a staple of television fare at that time, and later Bonanza, the Virginian, Wagon Train, and High Chaparral became favorites, although my personal heroes were the guys on Laramie. One the good, stable, level-headed cowboy, the other a rough and tumble rebel. You had your choice. I had crushes on at least one cowboy in each series.


Along with the cowboy heroes, I also fell in love with horses. I think it may have started when, on my first birthday, my dad gifted me with a wooden horse he had made. Rather than being a rocking horse, it sat on casters and so was mobile. All I could do was sit on it then, but later, according to my mom, I became a holy terror as I rode “Stormy” around the house, tearing up the linoleum and crashing into the corners of cupboards. I’m not sure how Stormy got his name, but he and I were attached at the wooden saddle, and I rode him hell bent for leather while wearing my cowboy hat, boots, and black jacket with white fringe.  At some point I outgrew Stormy so an extra board was placed under his body so he could grow with me. There was actually a pattern cut out for another larger “horse” that my dad intended to make, but he never got the opportunity. He passed away when I was five.

Stormy and me on my first birthday. 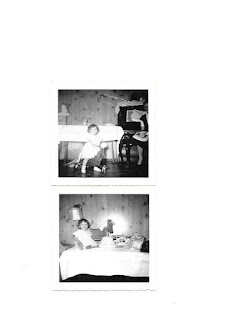 Westerns fell out of favor in Hollywood, and cowboy heroes were few and far between for a while. Then came Robert Redford in Butch Cassidy and the Sundance Kid. Redford as Sundance was an outlaw but damn, he sure fit the cowboy myth to a T. As a more modern day cowboy, Redford played the Electric Horseman, and though he was a little older, he was still a “be-still-my-heart” character. Tom Selleck and Sam Elliot were also great cowboys in the made for TV movies based on Louis L’Amour novels. Then along came romance novels, and they helped fill the bill, and still do, with plenty of cowboy heroes. Needless to say, they’re among my favorite romances to read.


Cowboys and horses. There is a lot of myth and romance wrapped up in each. I’m really not sure what the appeal has been for me, but it’s no surprise that it often works its way into the stories I write. It certainly did when I created the hero Chance McCord. This is an excerpt from a current work in progress, the second in the McCord Family Saga, that I’m calling Tetons by Morning:


A week later a storm hit and besides blanketing the Tetons and the Buffalo Valley in another layer of white drove a pack of wolves that normally stayed to the north in Yellowstone to start hunting closer to the ranches. Bison, too, moved into the cattle pastures, and Chance was forced to go out every day and chase them away. Today, accompanied by the giant herd dog Mariah, he rode along the perimeter of the winter pastures, checking for any signs the wolves stalked nearby. The wind blew like needles against his face, and he hunched his shoulders to ward off the rawness that sank into his bones. After a day spent in the saddle his body always reacted to the cold and refused to move the way he wished it still could. Blame it on old rodeo injuries. Blame it on just plain getting older. Whatever, he simply wasn’t the man he used to be, the one who rode the meanest broncs this side of the Divide and lived to tell about it. Chance McCord, Top Bronc Rider at the Cody Night Rodeo. Chance McCord, Best All Around Cowboy at the Cheyenne Days Rodeo three years in a row. He had the belt buckles to prove it, and the memories of more nights spent sleeping in the back of his truck than he cared to count. In a way, it kind of ate at his soul, because now Chance McCord rode along the edge of the Bridger-Teton forest and looked for tracks in the snow.

Posted by Lucy Naylor Kubash at 7:06 AM

Marshall Dillon was the it man for me.

Ah, the memories! Bonanza was my all time favorite western. Thanks for the reminders.

What memories you brought back. I had my crush on several of those TV and movie cowboys. Love your excerpt. Sounds like a story I'd read.