When we moved 9 years ago, I was forced to sort through the tons of research material and other paperwork that I’d accumulated in my years of writing. Most of it heralded from the DBI (Days Before Internet), if it’s possible to remember that time, and it is truly amazing what I thought I might want to use someday. In those DBI, there was no Google to tell you anything you might want to know, so I kept anything that looked interesting. I shredded and threw away a lot, but at some point I stuffed a lot of that collection into a box and took it with me to the new house…where it has sat for 9 years. Occasionally I would look at it and think, “I really should go through that stuff.” I would often move it from one room to another and put something on top of it so I wouldn’t have to see it. I confess I really am notorious for putting things off, especially when it involves deciding what to throw out and what to keep. Eventually, I forgot what was even in The Box.


A day of reckoning finally arrived, and somehow I managed to tackle that box. It’s pretty incredible what I considered worthy of keeping at one time: lots of newspaper clippings, including recipes from a column called Cook of the Week that once ran in our local paper; maps and brochures from places where we’d traveled and that I might want to go back to or use as a story setting; a few school papers and drawings from when my kids were little; notes from conferences and workshops that I attended years ago. Some of those are still relevant. Others, like the ones from spotlights on certain publishers, are long out of date. Most of the publishers spotlighted are long gone. There were a few notebooks with essays I wrote, story ideas and synopses, and a number of half-used notebooks. There was even a finished short story that was actually a companion to The Christmas Wish (now published on Amazon) that never sold. One newspaper clipping of special interest told of the Crazy Horse Memorial. We had visited the memorial while it was in the early stages of being carved out of a mountain in South Dakota and comparing it to the pictures we took two years ago, you can see how far they’ve come in the project.


You might think it was a pretty big box, considering everything I managed to cram inside of it, but it really is just average size. Just goes to show what you can accomplish when you don’t want to face throwing stuff away.


So there I was, faced with three piles of stuff. What to keep, what to throw away, and what the-heck-should-I-do-with-this? It’s a bit like Pandora’s Box, while all the stuff was safely tucked inside, it didn’t cause any problem. Now that it’s all been set free, I need to deal with it. It’s a family curse of sorts, one we often discuss and sometimes joke about; the fear of throwing stuff away. Must be in the genes. We all fight it, the need to keep too much stuff, and worst of all, to keep it until somebody else has to go through it. Fighting the urge, I now have a bag of stuff that will be recycled (which somehow makes me feel better than just tossing it in the trash) and one big pile of yet-to-be-decided. Since it’s sitting on the floor of my writing room, let’s see how long I can let it stay there. One thing I refuse to do is cram what’s left back into the box to save it for another day. Fortunately, unlike Pandora’s Box, it didn’t contain anything evil, but perhaps, like the last thing to emerge from it, there is Hope I will finally be rid of my own troublesome box of stuff. 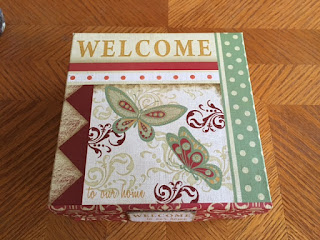 Here's a picture of the little box I bought to hold some of the recipes and newspaper clippings I decide to keep. At least it's cute.

Posted by Lucy Naylor Kubash at 6:09 AM

I can soooo relate to this, Lucy. When we moved last year, I decluttered using Marie Kondo's method which helped so much. So much emotion was attached to the things I'd saved when I'd saved it, but had lost its meaning over time. Going through papers, notes, and research documents is the hardest, isn't it? And all the memorabilia I'd saved for the kids? They didn't want any of it. Hard to throw away those macaroni Christmas ornaments...well, it will be some day.

You nailed this one, Lucy! Right now I'm dealing with boxes of loose photos and sorting them out to give to my kids. I may never finish since each photo must be looked out, the.time and place taken and how old the subjects were. Memories. At least they can't be given away -just shared.

You nailed this one, Lucy! Right now I'm dealing with boxes of loose photos and sorting them out to give to my kids. I may never finish since each photo must be looked out, the.time and place taken and how old the subjects were. Memories. At least they can't be given away -just shared.

I am equally hopeless at throwing things out! I don't have cute boxes like yours, otherwise I'd have even more stuff! I suppose you could wallpaper your writing room with the newsclippings - that way they'd always be handy! Great post.

Maybe it's a thing with writers, we just need to save everything. Loralee, I have several boxes of photos that I also need to sort through and mark. Betty, I just downloaded a book, 365 Days to Declutter Your House, or something like that. Maybe it will help, once I actually read it, lol! Patty, hmmm, not a bad idea. A large bulletin board maybe? Thanks everyone for commenting!

I got rid of a LOT of clippings, articles, notes from conference workshops, etc. I still need to go through more. Love your box.

Thanks for stopping by, Diane. Good luck with purging your collection!

I think I have two or three boxes (file folders) stuffed under my bed that I really need to go through. I also have old copies of the RWR and The Writer that I've saved for some reason. I probably could/should toss everything. But will I?

Soooo much stuff that was important to us at one time. I have notebooks full of hand written notes, story ideas and rough drafts. Can't bring myself to throw them out though. Like Betty said...someday...Maybe...